Designer Christian Siriano recently held a cozy fashion show in the backyard of his home in Connecticut.

Coveted designer Christian Siriano hosted a cosy fashion show in the backyard of his Connecticut home on Thursday. Siriano, who has been making masks lately in his atelier, had a small show with only a few people in attendance. These people had their own picnic baskets and masks.

While talking to the Associated Press about his special show, Siriano said, “We just needed an escape. I was scared people weren’t going to come all the way out here. I just felt like my clothes, they need to be seen, and I’ve been sitting at home depressed. Really, I just wanted to have some fun.” His collection featured beautiful bright coloured ball gowns, quirky prints that had panels from comic books and some of these clothes even had the simple text ‘Vote’, written on it.

The show was live-streamed for the rest of the fashion industry, just like how other designers have been showcasing their clothes online. 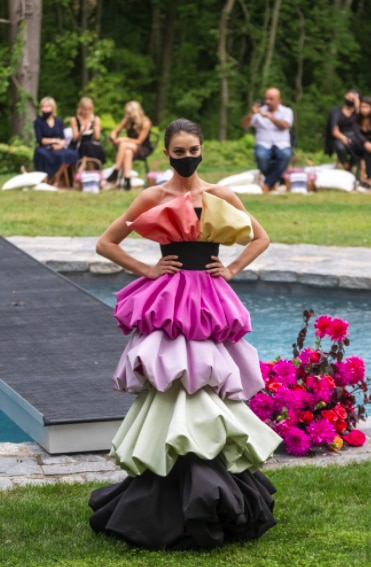 Siriano’s latest collection was inspired by the movies that he loved as a child, the old comic books that he has been re-reading during the quarantine and his love for painting and sketching.

ARTIFICIAL INTELLIGENCE, INTERNET OF THINGS TO BE THE FUTURE OF FASHION